Stephen Metcalfe, local MP for South Basildon and East Thurrock has recently visited the Pegasus Club again and heard from the new owners about their plans to breathe new life in to the facility. 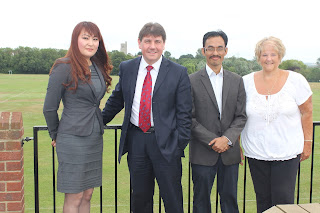 As many will know, The Pegasus Club was sold when Coryton Oil Refinery went bust in 2012. Initially a small group of local activist, with the support of Stephen Metcalfe, tried to find a way of securing the club as a community asset, but unfortunately it was not to be and ultimately the club was sold and then closed for a number of months.

Described by Stephen Metcalfe MP, as “East Thurrock’s hidden jewel”, the Pegasus Club has now re-opened and is trying hard to re-establish itself as a community sports and social hub open to everyone in the area.

Stephen Metcalfe commented: “I was pleased to hear the news that the Pegasus Club has attracted the investment required to preserve it for the use of the local community and now want to ensure it has a long term future in its current format.”

“The Pegasus Club really is the hidden jewel of East Thurrock, and it offers beautiful views and landscapes to those who take the time to come and visit it”.

“Now, for the club to have a future they need to win back members and encourage the community and local residents to come and make use of the Club.”

To achieve this, The Pegasus Club are holding a variety of upcoming events, including open days, live music evenings and activities for Children. There are also ambitious plans for links with businesses and international partners abroad in order to truly put the Pegasus Club back on the map.

Those who are interested in getting involved or finding out more about the Pegasus Club can do so by visiting the official website at: www.pegasuscountryclub.net
Posted by Stephen Metcalfe at 17:14