Stephen Metcalfe, MP for South Basildon and East Thurrock, last night held an adjournment debate in the House of Commons to discuss the closure of the Coryton Oil Refinery.

Following the debate, Stephen said: “Although the Administrators’ announcement on Tuesday that they had sold Coryton as a fuel terminal made redundant much of the case that I wanted to build to save the Refinery, I was still determined to fight for the constituents that I represent.”

“Despite the disappointment of the announcement, the debate did provide an opportunity to seek answers in public to the questions that I have been asking in private for many weeks and months. I received assurances from the Minister that the case for Coryton has been explored from every angle.”

Stephen told the House, “The closure of Coryton was obviously not the outcome I fought for and the announcement was one that I had hoped never to hear. I believe it represents a sad day for the refining industry in the UK, a sad day for South Essex and above all it was a devastating blow for the hundreds of dedicated workers who have fought so hard to keep the refinery open.”

Whilst Mr Metcalfe received assurances from the Government that all avenues were explored, the MP for South Basildon and East Thurrock has called for a Parliamentary inquiry into the administrative process surrounding closure of Coryton.

Although the Minister accepted that there might be grounds to look at the process, he was less certain that the timing of any such inquiry could possibly be able to save the refinery.

Stephen Metcalfe MP commented: “I remain committed to ensuring that everyone, from the work force and the bond holders to each and every stakeholder, has been treated fairly by this process. I am hoping that an inquiry will ensure that this is the case.”

The Government has assured Coryton workers that they are now doing everything that they can to support those who have lost their jobs and have stated that they will do everything possible to bring new jobs and prosperity to the area.
Posted by Stephen Metcalfe at 18:17

Stephen Metcalfe secures debate about the future of Coryton Refinery

Following a disappointing stakeholders meeting at the Department of Energy and Climate Change last week, Stephen Metcalfe MP has secured a debate in the House of Commons to make the case for Coryton Refinery once more.


The Adjournment Debate, scheduled to take place this evening will be an opportunity to again explain the importance of the refinery and underline the severe consequences of its closure.


Stephen said: “Yesterday’s announcement that the Coryton Oil Refinery in my constituency of South Basildon and East Thurrock will close was a gravely concerning one. It is a sad day for the UK refining industry and above all a sad day for the many dedicated staff who have fought so hard to keep the refinery alive.”


“I will use this debate to re-state the importance of the refinery historically, socially and economically and will call on the Government to ensure that they have explored every avenue possible to avoid the catastrophic consequences of the closure of Coryton.”
Posted by Stephen Metcalfe at 11:46


During PMQs, Stephen asked William Hague, who was standing in for the Prime Minister, to ask David Cameron to call an urgent summit over the future of Coryton.
Posted by Stephen Metcalfe at 10:33

Since Parliament returned on Monday, Stephen Metcalfe, Member of Parliament for South Basildon and East Thurrock has been working hard both on the floor of the House and behind the scenes to see what further support the Government can give to secure the long term future of the Coryton Oil Refinery.

Stephen said: “Needless to say, I am deeply concerned that a buyer for the Refinery has not been found and that the long term future of the plant has not been secured. I want to assure everyone that I will not give up hope of finding a solution until every avenue has been explored and no stone left unturned.”

“Since Monday, I have met Charles Hendry, Energy Minister, again to request that he and his Department consider what further action, including financial assistance, the Government can take.”

“I have contacted the Treasury and briefed a Treasury Minister on the situation and asked that they explore what financial support might be available and how that might be structured.”

“I had previously raised the problems at Coryton at Prime Minsters Questions and tried to get called again yesterday to ask the Prime Minster to encourage Ministers across Government to explore every avenue including the possibility of financial assistance, such as we gave the banks, to keep the Coryton Refinery open.”

“As I was not called, I have made a request to meet the Prime Minister personally to discuss this issue with him; I have written to brief him on the situation; I have tabled a written question to the Prime Minister asking what contact the Government has had from the Administrators asking for financial assistance and was today able to ask the Leader of the House to hold an urgent debate on the Refineries future.”

“In light of his response, I have applied to hold a debate on the floor of the House of Commons and am waiting to hear when that might be.”

“And I have contacted colleagues from across the County to ask them to support the efforts to keep the refinery open.”

“Finally, I can assure the staff, Management and workers, and the wider community that I will do everything I can within my power to save the Refinery and the vital local manufacturing jobs it provides.”
Posted by Stephen Metcalfe at 09:58

Stephen Metcalfe, Member of Parliament for South Basildon and East Thurrock, has praised the community spirit demonstrated by young and old alike which helped to make the Queen’s Diamond Jubilee a weekend which will be remembered for some time to come. 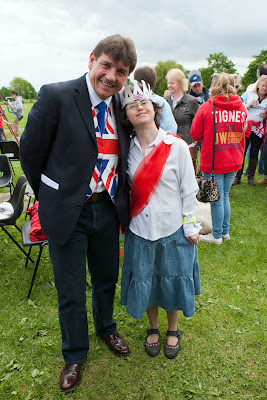 Stephen said: “I have never seen so many people all across South Basildon and East Thurrock getting together to make the Queen’s Diamond Jubilee such a great occasion.   It was great to see everyone coming together in celebratory mood and, in some cases, battling against the elements!
Amongst other events, Stephen attended Basildon Pensioners Association Jubilee Party, Thurrock Foodbank collection at Tesco in Pitsea, Stanford Carnival, Northlands Park Fun Day, St Margaret’s Spring Fayre and Bowers Gifford Village Fete and many other events, he even met the Queen at the Scratton Road Street Party!
“Congratulations must go to all the people who worked so hard to organise these events and to those who took part in the festivities.  It seemed to be an occasion which drew together so many different strands of the local community and everybody was out enjoying themselves.”
“We really need to make the Jubilee Celebrations an annual event so that we can celebrate all that it best about Basildon and Thurrock!”.

Posted by Stephen Metcalfe at 12:13