Stephen Metcalfe, MP for South Basildon and East Thurrock has today given his backing to bold reforms to the GCSE exams system.

The changes, announced earlier this week by Education Secretary Michael Gove, will mean an end to falling standards and a focus on the subjects that employers clearly say that they value most. They have been already been endorsed by the Institute of Directors and the Confederation of British Industry.

Under the plans, English Baccalaureate Certificates (EBCs) will replace GCSEs in the core subjects of English, maths, sciences, languages, history and geography. Pupils will be assessed on the basis of a three-hour examination at the end of the two-year course, rather than the current system of modules, coursework and controlled assessment.

‘These changes will ensure that young people in South Basildon and East Thurrock have an exam system that matches the world’s best and prepares them for success in the workplace. Equally, these reforms will mean that local businesses have access to the skills that they need to thrive.

‘For too long under Labour, politicians tried to take parents for fools with tall tales of ever-improving results. From this week, exams will no longer be about making our politicians feel good, but about making sure our young people succeed.’
Posted by Stephen Metcalfe at 12:58

Stephen Metcalfe, Local MP for South Basildon and East Thurrock is encouraging residents to help tackle food poverty this October by taking part in a nationwide food-drive run by Sainsbury’s and FareShare, the national charity tackling hunger across the UK. The second annual Million Meal Appeal will take place on Saturday 6th and Sunday 7th October and Stephen will be at the Sainsbury’s Nevendon on 6th October at 10:30 to greet customers and help support this unique food drive which will benefit more than 700 charities and projects across the UK.

Last year’s ‘Million Meal Appeal’, which took place on Saturday 26th November, was a huge success and involved 600 Sainsbury’s stores. Thanks to customers’ generosity, together with Sainsbury’s pledge to match donations, FareShare could deliver food for over 1.2 million meals to 700 charities and community projects it supports.

This year’s appeal will see over 900 stores involved in the two-day food-drive to help 720 charities and community projects which FareShare supports. Customers will again be able to choose to donate an item from the Million Meal Appeal shopping list which consists of long-life products including tinned goods, dried pasta, pasta sauce, rice, tea and instant coffee. The items are purchased as normal and then placed in the collection box after checkout. Customers shopping on Sainsbury’s Online can also choose to make a £1 donation between 3rd and 9th October.

Stephen Metcalfe said: “I’m really proud to be supporting the second-ever ‘Million Meal Appeal’ with Sainsbury’s and FareShare. I know last year’s appeal at the Nevendon store was a great success and highlighted the generosity of Basildon residents and how by working together, we can tackle food poverty in this country. I hope that Sainsbury’s customers can join me in getting behind the appeal and add an extra item to their shopping on the 6th or 7th October in support of this very worthwhile initiative”.

Assisting Mr Metcalfe in the food drive will be a team of local volunteers. If you are interested in joining this team, please visit www.fareshare.org.uk to register.

Posted by Stephen Metcalfe at 13:54 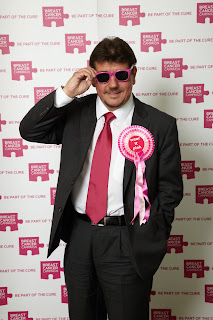 Stephen Metcalfe, Member of Parliament for South Basildon and East Thurrock is backing the fight against breast cancer by taking part in Breast Cancer Campaign’s award winning fundraiser, wear it pink day – and wants constituents to join him.

Now in its 10th year, wear it pink, on Friday 26 October 2012 will see supporters from all over the country in schools, colleges and businesses embracing the event’s new theme, superheroes. The theme stems from the charity’s belief that everybody who joins the fight – from people affected by breast cancer, to Breast Cancer Campaign scientists and all wear it pink participants – is a superhero.

Breast Cancer Campaign is asking everyone to pull on something pink and donate £2.00, whether it’s a superhero cape, pink socks or pink pants you wear over your tights, you can help the charity achieve its target of raising £2 million, so they can continue to fund ground-breaking research.

Join the hundreds of thousands of people who take part in wear it pink every year. With your help Breast Cancer Campaign can improve survival rates for the one in eight women who experience breast cancer during their lifetime.

Stephen Metcalfe MP says “Every year in the UK, around 48,000 women and 340 men are diagnosed with breast cancer. This is why we all need to support wear it pink day on 26 October, so that Breast Cancer Campaign can continue to fund research which will one day lead to a cure.”

To take part in the UK’s original and best pink day visit wearitpink.co.uk and register to receive your free fundraising pack now. Vanish is backing the fight against breast cancer for the third year running by raising an incredible £250,000 for wear it pink.
Posted by Stephen Metcalfe at 10:45

For the year to June 2012 the number of student visas issued has decreased by 30% compared to the year before.

Commenting Stephen said: “Immigration is a very important issue for people in Basildon & Thurrock. I know that local people were deeply frustrated about the chaos which was the hallmark of our immigration system for too long. For years under Labour immigration was uncontrolled. Net migration to Britain reached more than 2.2 million people - more than twice the population of Birmingham. The system was broken and nothing was being done to fix it.

“We now have a Government which is doing what is needed to bring immigration under control. All the routes of entry into the UK are being tightened up. Economic migration has been capped, bogus students are being turned away, and the rules on family migration are being made more robust.

“We are now seeing the impact of this. Immigration is still too high but we now have a government which is determined to bring it down to sustainable levels in the tens of thousands.”
Posted by Stephen Metcalfe at 11:21

Earlier this week, Stephen Metcalfe, local MP for South Basildon and East Thurrock and Mark Francois, MP for Rayleigh and Wickford, had the privilege of visiting the Citizens Advice Bureau (CAB) at the Basildon Centre.
Stephen and Mark took the opportunity to meet volunteers and staff, and to find out what services the CAB offer.
Stephen commented: “The free, independent, confidential and impartial advice offered by the CAB is a lifeline to thousands of people in Basildon. In these difficult economic times, the services provided by CAB have never been so important, nor have they been so widely used. Last year alone, the Basildon District CAB helped 8,354 clients with 15,435 different issues.”
The CAB is committed to educating people on their rights and responsibilities on issues spanning from debt and employment to housing and immigration. In addition to providing this one on one advice, they are also influencing policy, providing Parliament with a finger on the pulse of every local community.
Stephen added: “What is truly remarkable about this service are the volunteers that make it happen. Nationwide, CAB’s rely on 21,500 volunteers. In the Basildon branch, 81% of staff are volunteers who willingly give up their time to help with administration, reception, IT, marketing, PR, fundraising and interpreting.
Without their dedication and hard work, the CAB would simply not exist and I would like to take this opportunity to thank each and every volunteer.”
The CAB is always on the lookout for new volunteers. Indeed, nationwide, 5,000 new recruits are needed each year to continue to meet the needs of local communities. Training is free, expenses are paid and one third of the volunteers who leave the service go onto full time education or employment.
If you are interested in joining this incredible team of volunteers, please visit http://www.bascab.org.uk/Volunteer/ to find out more.
Posted by Stephen Metcalfe at 15:33

Last Saturday, Stephen Metcalfe, Member of Parliament for South Basildon and East Thurrock, spent a busy day meeting and chatting with residents as he manned a stall at the Orsett show.

Stephen and his team handed out hundreds of leaflets, spoke to numerous passers-by and even provided free balloons to keep the children entertained.

As ever, the show itself was highly successful, with thousands of people attending the day’s events and soaking up the cheerful atmosphere and bright sunshine.

In addition to the traditional county show events, people could also enjoy activities such as Laser Clay Pigeon Shooting, pony riding and a fun fair, as well as being entertained with various arena events, including a spectacular stunt show.

Stephen said “There’s an awful lot of organisation that goes into the events and the committee should be congratulated on another successful show.”

“This is the fourth time we have taken a stall at the show simply to make ourselves available to anyone who wants to talk to us.”

“The Orsett Show is one of Thurrock’s great traditions, one which I hope will continue to prosper and grow.”
Posted by Stephen Metcalfe at 14:09