During Prime Minister's Question time I asked David Cameron to join me in thanking all those involved in organising the Forget Never - The Somme project in Basildon.


Forget Never commemorates the 100 year anniversary of the Battle of the Somme in World War One, which was the bloodiest day in British military history with an enormous amount of casualties.

It is important that young people have the chance to learn the lessons of the past and that we all remember those who made the ultimate sacrifice.

You can watch a recording of my question and the Prime Minister's response here.
Posted by Stephen Metcalfe at 17:12

I was pleased to meet with members of the Armed Forces community and back their 'Count Them In' campaign, which aims to include new questions on the UK census.

It is estimated that there are currently between 6.5 million and 6.7 million members of the Armed Forces community living in the UK, representing about a tenth of the population. However little is known about the exact number and needs of this important group.


Including new questions on the next UK census would provide public bodies, local authorities, and charities with valuable information to ensure they are able to deliver the best services they can for our Armed Forces community.


Our brave servicemen and women are dedicated to keeping this country safe and where we can help them, we should. This worthwhile campaign by the Royal British Legion deserves our full support.
Posted by Stephen Metcalfe at 15:17

I recently visited Northlands Primary School in Basildon where I was invited to listen to pupils' views on the EU referendum and take part in their big discussion. 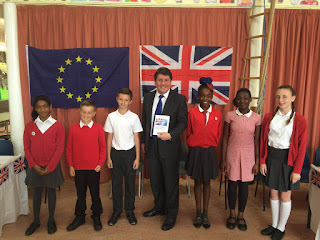 The pupils prepared a range of written work containing their views which they presented to me and I helped answer any questions they had.

It was a fantastic visit and I enjoyed the chance to discuss such a topical issue with the pupils. They asked very thoughtful questions on what the European Union means in relation to our country and I was impressed by the level of understanding they showed.

The result of the EU referendum will affect everyone across the country, both young and old. It is a truly once in a generation choice whether to remain in the EU or to leave and it is crucial that everyone examines the issues on both sides of the debate and ultimately votes in this vital referendum.
Posted by Stephen Metcalfe at 16:57

On Saturday I was pleased to join local residents in marking the Queen's 90th Birthday at St Catherine's Church in East Tilbury.

It was a fantastic community occasion and an opportunity to celebrate the reign of our longest-serving monarch. Thanks to all who made the event such a great success.

Then on Sunday I joined the celebrations at Westlake Park in Bowers Gifford where although it was raining a hardy few turned out!

Credit to Bowers Gifford Parish Council and the volunteers who organised a superb day for everyone.

Posted by Stephen Metcalfe at 16:44

I recently met with guide dog owners in Westminster to discuss their "Access All Areas" campaign, led by the national Guide Dogs charity. 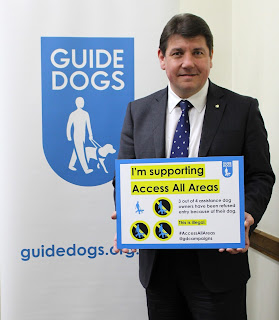 The campaign wants guide dog owners to be able to carry out everyday activities such as travelling by taxi or going to the local shops without the risk of being unfairly turned away.

According to law, guide dog owners are allowed the same access to shops, restaurants, and taxis as everyone else, but currently three out of every four are rejected because of their dog.

I am pleased to support this campaign and its call for disability equality training as well as for offenders to be properly punished under the law when they illegally discriminate against guide dog owners.

It is important that we raise awareness of this issue and that guide dog owners have the full support of local communities and businesses.

You can find out more about the Access All Areas campaign and how you can support it here.
Posted by Stephen Metcalfe at 16:00