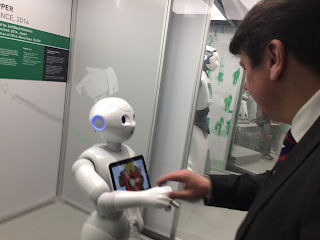 I enjoyed the chance to visit the Robots exhibition at the Science Museum in London, as part of an event to launch the Science and Technology Committee's new Science Communication and Engagement report.

Pepper is a companion robot with the ability to perceive human emotions and adapt his mood to people he engages with.

Built by Japanese-owned SoftBank Robotics, Pepper is being used for customer relations in over 140 SoftBank Mobile stores in Japan, with other stores set to follow.

I was so impressed with the exhibition and how the Science Museum is helping to inform the public perception of robots. I especially hope that young people with a passion for science and technology see how robotics can be incredibly exciting and also useful: we should see more and more robots like Pepper in our daily lives in future, with what was once science fiction becoming reality in shops, businesses, and homes.

Find out more about the Robots exhibition at the Science Museum here.
Posted by Stephen Metcalfe at 14:58

Reaction to triggering of Article 50

Yesterday was a momentous day in the history of our country, with the Prime Minister giving EU Council President Donald Tusk formal notification of our decision to leave the European Union.

Following a well-informed and hard-fought referendum, the British public voted to leave the EU in larger numbers than we have seen in any recent General Election.

I am pleased that this decision has been respected and it is now crucial that the Government focuses its efforts on obtaining the best possible deal in the exit negotiations.

By no means will it be an easy process, however I am confident that both sides will want a mutual agreement and for the UK to leave on good terms.

In my role as Chair of Parliament's cross-party Science and Technology Committee, I have already called upon the Government to prioritise the interests of science, particularly around the future of EU nationals in the UK.

I hope that both sides will be able to provide assurances to all our citizens--both EU nations in the UK and UK nationals residing in other EU countries.

I am confident this is achievable and I look forward to contributing to the ongoing debate on our relationship with the EU in Parliament.
Posted by Stephen Metcalfe at 14:38

﻿﻿Ahead of the Prime Minister triggering Article 50 and beginning our country's formal exit from the European Union, I launched the Parliamentary and Scientific Committee's 'Science priorities for Brexit' pamphlet which was informed by advice and evidence from the research and innovation community.


I believe that the strength of UK research and innovation can be maintained and grown with the right mix of skilled people, investment, networks and collaboration, and regulation and trade.


The pamphlet details our Committee's position on these various issues and includes immediate actions that are required, what the priorities for the Brexit negotiation should be, and also UK domestic policy requirements.


Read the full version of my statement on the Parliamentary and Scientific Committee website here.
Posted by Stephen Metcalfe at 15:01 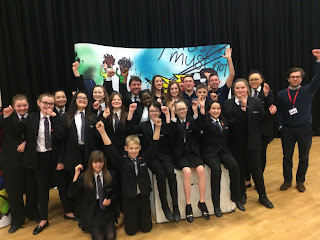 I was pleased to be invited to Woodlands School to watch a presentation by the Smashed Project, an international theatre-in-education programme dedicated to breaking the culture of underage drinking.

The Smashed Project is proven to raise pupils' awareness of the dangers of alcohol and designed to help them make informed decisions about consuming it in the future.

I was especially pleased to see how well all the pupils responded to this important message.

You can find out more about the Smashed Project here.
Posted by Stephen Metcalfe at 15:54 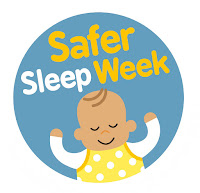 This week I am supporting baby charity The Lullaby Trust's Safer Sleep Week campaign which aims to raise awareness of Sudden Infant Death Syndrome (SIDS) and help new parents receive the proper advice from health professionals on how to sleep their baby safely.

According to the latest figures from the Office for National Statistics, while the overall SIDS rates for England and Wales showed a 17% decline since 2013 and a 39% overall decline since 2004, the rates in the East of England have decreased more slowly showing only a 3% reduction since 2004 and remaining higher than the national average.

Adding to this worrying picture is a national survey commissioned by the Lullaby Trust which found that over 38% of parents in the East of England are unsure of one of the most fundamental steps to reduce the risk of SIDS: sleeping a baby on its back for every sleep.

Evidence shows that babies who slept on their back for every sleep are 6 times less likely to die from SIDS than those who sleep on their front or side.

Find out more about Safer Sleep Week here.
Posted by Stephen Metcalfe at 13:20 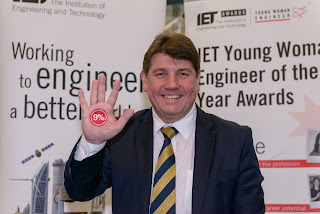 This International Women's Day I'm supporting The Institution of Engineering and Technology's (IET) #9percentisnotenough campaign to boost the number of female engineers.

Through its Young Woman Engineer of the Year aware, the IET is highlighting the work of young female engineers and encouraging more girls to engaging in the crucial STEM subjects.

Find out more about the campaign here.

Posted by Stephen Metcalfe at 17:32

My question to the Prime Minister

I was pleased to have the opportunity to ask the Prime Minister a question during the weekly Question Time in Parliament.

Earlier in the week I chaired a seminar at the Royal Society, looking at the priorities for the UK science community as the Government starts the process of our withdrawal from the European Union.

A report of the meeting will be published in Parliament on 21 March and I asked Theresa May to take into account the views of the science community.

You can watch a recording of my exchange with the Prime Minister below:

Posted by Stephen Metcalfe at 14:54