Stephen Metcalfe, local MP for South Basildon and East Thurrock, commenting on the recent developments at the Coryton Oil Refinery said: “I was extremely disappointed by yesterday’s news but, in the light of a failure to secure a deal at this point, it is understandable that PWC has had to put a halt to the Turnaround Programme and to start the process of consulting with employees about redundancy.

“I have huge sympathy for everyone at the Refinery following today’s news.  Staff, Management and Unions have worked incredibly hard to find a long term sustainable future for the Refinery. Today’s news is a real set back.

“That said, I am aware there are still interested parties and that PWC have confirmed discussions will continue, but they have had to make some choices based on the fact no deal was in place by the deadline.

“I will continue to talk with both the Refinery and Government, as I have today, to see what can be done even now, to turn these events around.

“Over the last four months there have been a number calls for the Government to do more to save the Coryton Refinery. I want to state for the record that the Government has done all it can to support the Refinery and the process of finding a long term solution to the Refinery’s problems.

“The Government have been involved at every stage and continues to support the Administrators in seeking to find a solution. I am disappointed that Labour politicians are trying to use the plight of Coryton workers for their own political gain.

“There may have been an argument that the Government could have provided some form of guarantee had a workable restructuring plan been an option, but that is not the case and not a viable alternative.

“The announcement yesterday is an outcome that none of us had wanted. I have worked closely with the refinery to explore a number of options and had hoped and still hope that a solution can be found which would secure the hundreds of jobs the Refinery supports.

“I and the Government will continue to do what can be done, and I will not give up hope until every option has been fully explored.”

Stephen Metcalfe, Member of Parliament for South Basildon & East Thurrock has welcomed new Government action to give Essex police the power to prosecute up to 50 per cent of magistrates’ court cases.

The red tape-cutting move will mean thousands of cases can be taken through the courts by officers, saving time and money and meaning a quicker result for victims.

Commenting Stephen MP said: ‘Wasting police time is a criminal offence, but it’s happening in our courts week in, week out.

‘At the moment the police and the Crown Prosecution Service are forced to duplicate work when cases are taken through the magistrates court, wasting time and money and meaning the victims of crime have to wait longer to get the justice they deserve.

‘These changes will mean a leaner and more effective system, with our trusted local police able to put fighting crime first.’

Home Secretary Theresa May MP said: ‘This move will slash bureaucracy, speed up justice and hand more discretion back to police officers.

‘Our model of more power for the police and the public and less for the bureaucrats will free up the finest officers in the world to fight crime.’
Posted by Stephen Metcalfe at 10:12

The Money Advice Service is a free, independent service, established by government and funded by a levy on the financial services industry.

The health check is a free service available to everyone online at: www.moneyadviceservice.org.uk

Stephen Metcalfe MP said: “This is a great tool to help people plan for the future, which is why I am urging everyone to spare a few minutes to complete the financial health check.

It takes less than 10 minutes to complete, involves no paper work and provides an action plan suited to the individuals circumstances. These action plans include quick ‘must do’s’ as well as clear financial priorities for the longer term – helping people both now and in the future.”

Stephen added: “Whether constituents need online, face to face or telephone help with their finances, the Money Advice Service may be able to help. I would urge constituents to get in touch with the service and make the most of the free resources on offer.”

Tony Hobman, Chief Executive of the Money Advice Service, thanked Stephen Metcalfe MP for his support and said: “We are grateful to Stephen for raising awareness of the free services that the Money Advice Service offers. We can all enjoy life more if given the right money advice at the right time in the right way. We’re not here to sell people anything and we won’t charge anyone – we are here to help people take decisions about their money and plan for a better future for themselves and their families.”

Posted by Stephen Metcalfe at 14:30

Charity calls to end the cruel tethering of horses 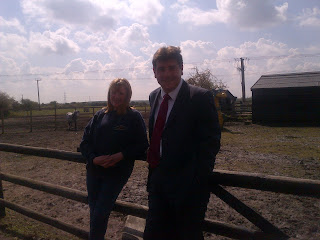 Stephen Metcalfe, Member of Parliament for South Basildon and East Thurrock, visited The Essex Horse and Pony Sanctuary recently to learn about the campaign to stamp out the cruel practice of long-term tethering inflicted on tens of thousands of horses across the UK.

Tethering is where a horse is tied to a rope and can only circle a small section of land. The Sanctuary Manager Sue Allery, explained that this practice, while considered acceptable for short periods, is ill-advised for long periods.

The practice was most widespread  when horses used to be working animals and were tethered overnight following a hard day’s work. This was fine as they got plenty of exercise and movement during the day. Now that they are predominantly keep in one place and don’t work, horses can be left tethered for extended periods of time. The main problems associated with this practice are:

·         It has been known for horses to out-grow their restraints with them becoming lodged within the animal.
·         It prevents mothers from looking after their newly born fouls.
·         The horses can get harassed by dogs, or children unaware of their plight.
·         Lack of exercise
·         Inadequate access to food and water
·         Unnatural existence as they are grazing and horde animals

Speaking after the visit, Stephen said “While we are all aware that the mistreatment of animals does happen, I was unaware of the extent to which horses were exposed to such cruel conditions. Owners have a duty of care for their animals and are also required to get an annual Horse Passport, where a vet checks that the animal is well treated and in good condition, if they fail to provide one, then they face up to 2 years in prison and a £10,000 fine. Yet it seems this is not enforced, I will be writing to Essex Trading Standards to find out why. I will also speak to my colleagues at Parliament to see if any further legislation is required to address this grave-issue”

Posted by Stephen Metcalfe at 10:49