Stephen Metcalfe, the MP for South Basildon and East Thurrock has called on the Prime Minister to support UK science and fight for increased funding to the British scientific community. 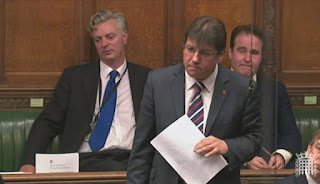 Stephen Metcalfe who has recently announced his intention to stand for chairmanship of the prestigious Parliamentary Science and Technology Committee has been keen to champion the cause of the UK science community throughout his time as MP – and has been increasingly vocal about the need to include the technology industry as part of the Government’s economic plan.

Rising to the floor of the House of Commons during discussions following the recent G7 meeting, Stephen Metcalfe, asked the Prime Minister: “One way to deliver on our climate change target (as agreed at the G7) and boost our economy is through the development of new technologies. Will my right hon. Friend therefore commit to supporting our UK science community, fight for an increase in funding around the Cabinet table and pledge to aim towards spending the same percentage of GDP on research and development as our European partners?”

The Prime Minister responded in agreement with Mr Metcalfe’s sentiments, saying: “We have looked very carefully at this in the past and recognise that science is an important part of enhancing the growth, production, productivity and potential of the United Kingdom.”

Stephen Metcalfe, speaking later, commented: “Being MP for South Basildon and East Thurrock, I see first-hand the contribution that the science and technology industries have on the overall British economy. Basildon and Thurrock have a rich history of technological success. 1 in 10 of all the world’s tractors are made locally – and there is not an Airbus A380 that flies, that does not have a part made in Basildon.”

“That is why I am dedicated to calling on the Prime Minister to build on this Government’s already strong record on Science and Industry – and I will continue to do so if I am lucky enough to be elected as Chair of the Science and Technology Committee here in Parliament”.
Posted by Stephen Metcalfe at 13:41