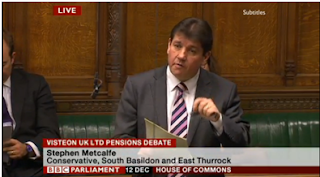 Stephen Metcalfe, local MP for South Basildon and East Thurrock, led colleagues from across the House today in a call to Ford Motor Company asking them honour their moral responsibilities to their former employees who suffered significant pension losses when Visteon UK was spun off from Ford.

The Pensioners’ nightmare began when in 2000 when the global automotive component operation of Ford Motor Company, Visteon UK, was spun off from Ford to reduce supply chain costs. Under the separation terms, Visteon employees were promised mirrored terms and conditions and ‘lifetime protection’ of their pensions.

Visteon employees were therefore outraged and dismayed when the company went into administration in 2009 leaving 3000 employees and ex employees with heavily reduced pension rights – sometimes up to a staggering 50%. Despite ongoing links with Visteon UK, and despite the fact that pensioners were encouraged to transfer to a fund that was underfunded by some £350 million,  Ford has refused to take responsibility, claiming that Visteon was its own company, responsible for its own decisions.

Comments made by Chief Executive of the Visteon Corporation Tim Leuliette in which he stated that Visteon did not stand a chance of surviving after being spun off have only fuelled the anger of disenfranchised ex-employees. This David and Goliath battle is now the subject of legal action UK and will be tested in court at some point in 2014. 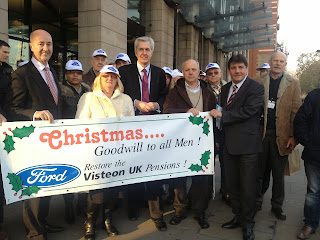 The debate, timed to coincide with the first anniversary of the Visteon debate held in Westminster Hall last year, saw a host of MP’s from across the House and across the country rally around the pensioners, urging Ford to accept their ethical responsibilities.

Mr Metcalfe, who chairs the APPG in support of Visteon Pensioners, opened the debate, calling on Ford to make good on their promises to the Pensioners, and to restore their now tarnished reputation.

He commented: “This is about getting justice for thousands of Visteon workers up and down the country who transferred their pensions into a pension scheme which ultimately collapsed. Many of the pensioners, including Dennis Varney from Basildon, worked for Ford and Visteon for over 30 years, dedicating their working lives to a company they trusted.”

“This is a moral issue, and I sincerely hope that Ford HQ in the US was listening, that they will face up to their ethical responsibilities, and that they will exercise a duty of care to their dedicated former workforce.”

The Minister, Steve Webb assured the House that he had been in conversation with Ford, and that a meeting is scheduled to take place. MPs from across the House greeted this step forward. Mr Metcalfe concluded that this issue will not be brushed under the carpet, and that he and colleagues will continue to fight for justice on behalf of their constituents.

Posted by Stephen Metcalfe at 17:07