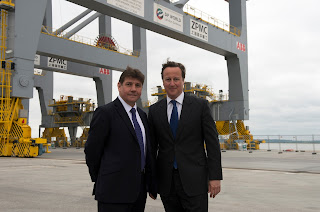 Yesterday Stephen Metcalfe, local MP for South Basildon and East Thurrock, asked the Prime Minister David Cameron if he agreed that the new London Gateway super-port will be central to both British and global growth.

The local MP first thanked Mr Cameron for making his recent pre-G8 “ambition” speech at London Gateway before asking: “Does he agree that the investment will assist our global export aims, stimulate world economic growth, encourage free trade and, above all, demonstrate that under this Government, Britain is a great place in which to do business?”

The Prime Minister praised Mr Metcalfe for standing up for his constituency so vigorously and urged Members of Parliament who have not yet seen the port to do so. He commented: “When you are there, you think that surely this must be happening in Shanghai or Rio, but it is actually happening right here in the UK—a massive investment that will cut costs for consumers and will really benefit our country.”

On his recent visit to Thurrock, Mr Cameron dubbed the port an ‘emblem of ambition’, adding that it will be central to Government plans of increasing trade.


Mr Metcalfe, who has been extremely supportive of the new development added: “London Gateway has been the focus of much attention lately and deservedly so. The benefits of the super-port will extend from the local where jobs and wealth will be created, to the global. I believe, as I said in my question, that the port will be instrumental in driving world economic growth, stimulating trade, and showing the world that Britain is a great place to do business.”
Posted by Stephen Metcalfe at 15:37